These 3 cheese low carb Cheesy Cauliflower Hash Brown Waffles are super crispy and made within minutes in a waffle iron. Only 2g net carbs per waffle and you can enjoy these for breakfast, lunch, dinner or simply have them as a snack.

Ever since I had my dash mini waffle maker I have become a waffle wizard in the kitchen. I mean I even make waffles out of only using halloumi cheese. I can't tell you some of the strange ingredients I have tried to make in the waffle iron.

My goal for these keto cauliflower waffles was to make them extra crispy but use healthy low carb ingredients like cauliflower and almond flour.

First want to rice some cauliflower in a food processor. Alternatively you can use raw or frozen prepackaged cauliflower rice. Add the cauliflower rice to a dry frying pan on medium heat and stir occasionally. Cook until it becomes dry, a little browned and crispy.

Next plug in the waffle iron and get it nice and hot. My waffle iron only has one setting. Toss the cauliflower rice in a bowl with the cheese, bacon crumbles, almond flour, salt, pepper and melted butter. Mix together until well combined. Spray the waffle iron with cooking spray and then scoop about a half cup of the mixture into your hands and form into a patty. Then place on the waffle iron and close the lid tight. I used a weight on top of the waffle iron to keep it closed tightly.

The waffles should only take about 2-3 minutes to cook. Although if you are using a large waffle iron it may take longer. These waffles will require that you use a fork to peel it from the bottom. Gently remove them and transfer to a cooling rack. (see video how I did this). Enjoy the hash brown waffles with a dollop of sour cream and a sliced green onion or jalapeno.

Top Tip: place your waffle iron on top of a plate to avoid a mess on your countertop. Due to the butter and bacon these hash brown waffles will be a bit messy while cooking and some grease may spill over.

I had to loosen the cauliflower waffle from the waffle iron gently with a fork in order to release them. They may turn out a little odd shaped but these are hash browns afterall.

Like I said earlier I have been know to throw everything in the waffle iron. To keep these cheesy waffles true to form with a slight variation you swap with these:

These waffles are sugar and gluten free.

In a pinch and need more breakfast ideas? Try these Quick and Easy Keto Breakfast Bites

🥣 Equipment used to make these waffles

The main equipment for this recipe is a waffle iron. I simply love my Dash Mini Waffle Maker. Not only because it's a mini and super easy to use but I also love that it's pink.

I Hacked Diabetes is a participant in the Amazon Services LLC Associates Program, an affiliate advertising program designed to provide a means for me to earn fees by linking to Amazon.com and affiliates sites.

Can I warm up these waffles in the toaster?

Due to the amount of fat in these waffles you should avoid warming them up in the toaster to avoid any fire hazards.

Do I have to use cooking spray?

Are these waffles low carb?

Each waffles contains roughly 2g net carbs and therefore can be considered low carb. They should also fit into a keto diet and are diabetic friendly. 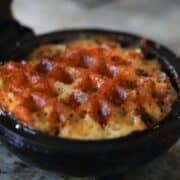 Top Tip: place your waffle iron on top of a plate or platter to avoid a mess on your countertop. Due to the butter and bacon these waffles will be a bit messy while cooking and some grease may spill over.