Sinful Cinnamon Keto Waffles made with cream cheese are soft and cakey and a perfect vessel for delicious low carb maple syrups, butter or whatever else you can top on a waffle without overloading on sugar. I topped mine with a cinnamon icing that is simply made with only 3 ingredients.

Not only are these perfect for dessert, I often have them for breakfast without the cinnamon icing and simply add some butter. Who doesn’t love waffles in the morning? Dunk them in coffee and I’m in heaven.

Whether having for dessert or breakfast, these cinnamon cream cheese waffles are sure to be a hit. Each one is lightly sweetened with powdered erythritol and a hint of cinnamon. Best part about them? They are quick and easy to make with a Dash Mini Waffle iron.

Ingredients for the Waffles

Cinnamon – that warmth of this spice just makes everything better

In a medium size bowl add the powdered erythritol, heavy cream and cinnamon. Mix until smooth.

Warm up that waffle iron.

Pour about 3/4 cup of the batter into the waffle iron if you are using a Dash Mini.

Wait 4-6 minutes and remove and continue making until all the batter is gone.

Can I freeze the Waffles?

Yes, place waffles in a freezer bag, they can last up to 2 weeks.

Do I have to use Cinnamon?

No, you can make these waffles sweet or savoury. Omit the cinnamon and erythritol and add in your favourite spices like oregano or rosemary and use them for burgers.

Can I use alternate Sweeteners?

Yes, use your favourite sweeteners such as monk fruit, stevia or allulose.

Check out my Desserts recipes for other diabetic friendly, keto and low carb options. 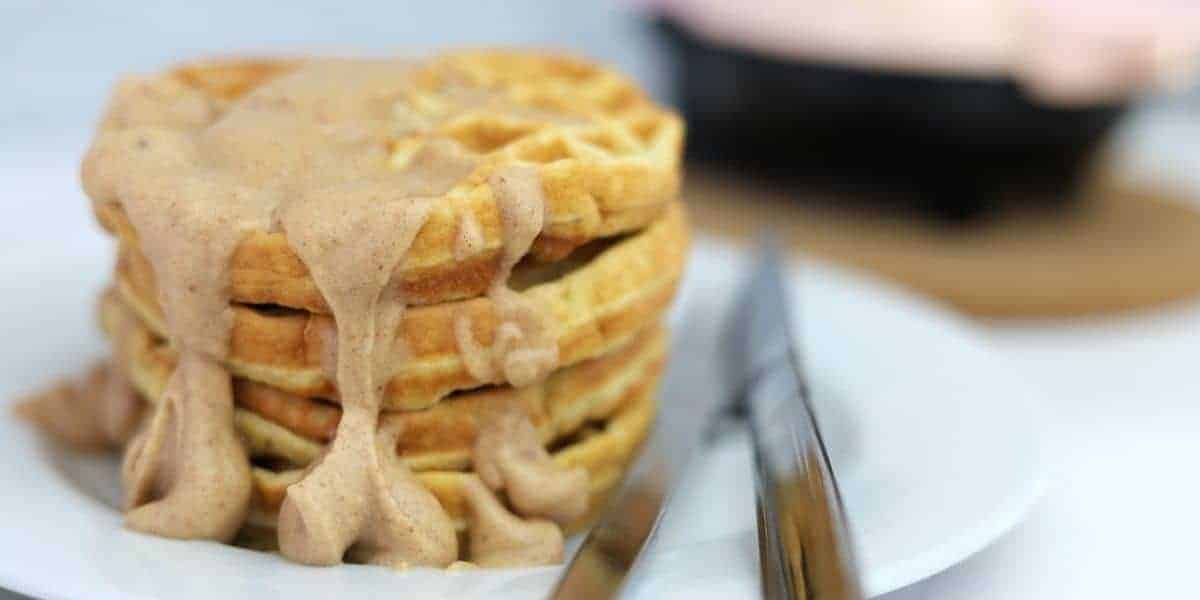 Sugar alcohols are 12g Each waffle with Icing is roughly 2.4g net carbs.

My name is Oscar, I live in Ontario, Canada. I am a Type 2 Diabetic and I use food to manage my blood sugars. No Medications! I follow a healthy ketogenic lifestyle and I create and share delicious diabetic friendly recipes. I also produce a weekly documentary called Real Life with Type 2 Diabetes (RLT2D). about me!

Get My Top 3 Recipes sent to your inbox!

ihackeddiabetes.com is a participant in the Amazon Services LLC Associates Program, an affiliate advertising program designed to provide a means for sites to earn advertising fees by advertising and linking to amazon.com.