Diabetic Spaghetti Squash Fritters are a great low carb recipe made with almond flour, fresh mint, and coriander. Keeping the carbs low with simple clean ingredients so that you can enjoy these crispy diabetic spaghetti squash fritters without worrying about your blood sugar levels.

You can also use the leftovers from making the spaghetti squash for this Spaghetti Squash Buffalo Chicken recipe.

With the mix of spices and the roasted flavor of the spaghetti squash, these will definitely be your new comfort food.

These spaghetti squash keto fritters were inspired by my Low Carb Zucchini Fritters recipe made in the air fryer.

Is spaghetti squash good for diabetics?

With only 5g net carbs per spaghetti squash fritter, they can be considered good for diabetics. It is a great alternative to traditional spaghetti and may also help with weight loss as each fritter contains only 2g of saturated fat.

Not only is spaghetti squash for diabetics good, but it contains Vitamin C (1 cup has 5.4mg), it also has vitamin A, B-6, thiamin, riboflavin, niacin, folate, pantothenic acid and vitamin K.

This is not medical advice, however, I measured my blood sugar levels after consuming one fritter and my blood glucose went back down to baseline within an hour.

Please see the fiber content and nutrition facts in the recipe card.

Low carb spaghetti squash fritters are made with a few simple ingredients and are fun to make after roasting the squash in the oven.

See the recipe card for quantities.

Don't get discouraged from making spaghetti squash because it involves using the oven.  It's actually very easy and pretty much a no-brainer that you can't mess up as long as you follow these easy steps.

I like to use half of the squash for this recipe and the other half for my Spaghetti Squash Buffalo Chicken recipe or simply to use as spaghetti with some low carb meat sauce.

How to make spaghetti squash in the air fryer?

Air fryer spaghetti squash is simple to make although it depends on the size of your air fryer. I am only able to make one half at a time.

Simply cut your spaghetti squash in half and place cut side up in the air fryer basket.

Drizzle with extra virgin olive oil and a sprinkle of salt and black pepper.

Air fry at 360°F for about 20-25 minutes. This will vary depending on the size of your squash.

My favorite pasta dish. I used the other half of the squash to make spaghetti with a meat sauce and topped it with some grated parmesan.

One spaghetti squash fritter contains only 5g net carbs and 131g per serving calories. This keto spaghetti squash is a great option for someone following a low carb diet and can be considered diabetic friendly. Using spaghetti squash in your diet can support making a variety of different recipes already mentioned in this post. Please see the recipe card for more nutritional information.

Top Tip: Be careful in cutting the spaghetti squash. To minimize the rolling of the squash, place a towel on your cutting board and cut the squash on top of it.

How long is leftover spaghetti squash good for?

When spaghetti squash is stored in an air-tight container in the fridge, it can be good for up to 1 week.

Why did my spaghetti squash fritters get mushy?

Remember to draw out the moisture by salting the cooked spaghetti squash before shaping it into fritters. 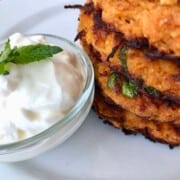 Top Tip: Be careful in cutting the spaghetti squash. To minimize the rolling of the squash, place a towel on your cutting board and cut the squash on top of it.