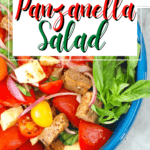 That's right, this Low Carb Panzanella Salad is made with bread! What? Bread is not keto! You can't eat bread on keto? Doesn't it spike your blood sugars? You're diabetic!

There are many ways to eat bread while following a ketogenic and low carbohydrate diet.

I don't believe food needs to be labelled as keto or not. In most cases, someone could eat a spoonful of sugar every day and still be considered "keto" as long as they eat zero carb foods rest of the day.

Labelling my recipes as keto or low carb is simply to differentiate them from traditional recipes. However, saying "that food is not keto" usually depends on the context of how much of it they are eating and what else they are planning to eat.

Rest assured, Carbonaut bread was used for this Low Carb Panzanella Salad recipe. It is new to the market and I find it actually tastes like bread, rather than the other ones I've had in the past.

What is a Panzanella Salad?

A panzanella salad is a Tuscan chopped salad usually made with with tomatoes and bread. Often added to this salad is some fresh basil, mozzarella and olive oil.

How do you make a Low Carb Panzanella Salad?

To make this Low Carb Panzanella Salad you would simply need some fresh ingredients like the tomatoes, basil and mozzarella. Most importantly if you are following a ketogenic diet you would need bread that is low in carbohydrates. There are many types of low carb breads on the market. Find which one you enjoy the most and use it in this recipe.

What to serve with a Low Carb Panzanella Salad?

This salad goes well with grilled meats such as a steak or a grilled chicken. However, this salad is super filling and can be a meal on it's own. With the hearty tomatoes, bread and mozzarella you may not want much else to go with it.

Does the bread get mushy?

The trick to this is making croutons out of the bread. Crisping them up in the oven so that they are golden and crunchy help the bread from getting mushy. If the bread is not crunchy enough it will definitely get mushy.

What kind of Tomatoes do you use?

How about a Creamy Fauxtato Salad - my take on a potato salad.

Get the New E-bookCheck out Low Carb Comfort Food!

4g net carbs per serving. Depending on the bread used the carb amount will differ.   All nutritional information is based on third-party calculations and should be considered estimates. Actual nutritional content will vary with brands used, measuring methods, portion sizes and more.

I am a Type 2 Diabetic and enjoy creating low-carb and diabetic-friendly recipes that are good for you! All recipes are developed to help you make great food without the highs and lows of diabetes.