Toasted coconut donuts are my all time favourite donut from Tim Hortons. In my opinion these Low Carb Toasted Coconut Donuts are the same if not better than Tim Hortons or Dunkin Donuts.

Since being diagnosed with Type 2 Diabetes I thought I would never eat one again. However, after a few attempts at perfecting the recipe, I can now enjoy them once again.

STEP 3: Add in the dry ingredients

STEP 4: Pipe or spoon the batter into a coconut oil greased and sprayed donut pan

STEP 6: Combine the glaze ingredients together in a medium size bowl and set aside

STEP 7: Allow donuts to cool completely before removing from pan

STEP 8: Dip tops of donuts into the glaze and then dip into toasted coconut to coat the tops of the donut

Glaze: The glaze can harden within a couple hours. You want to make sure the glaze is made while donuts are in the oven and once slightly cooled you can start the assembly. The glaze is what makes the coconut stick.

Storage: Store in an airtight container and enjoy within 3-4 days. Alternatively you can freeze the donuts once they are cooled for up to 3 months and top later. Allow the donuts to thaw out of the freezer for 1 hour and then glaze and top with toasted coconut.

Plain donut: You can make these low carb toasted coconut donuts without the cacao powder for a plain doughnut. Alternatively if you simply want a glazed donut you can dip in the glaze without topping with coconut.

Topping with coconut: You can dip the glazed donut into the toasted coconut or you can lay the donuts on a wire rack and top them with the toasted coconuts. Dipping in the coconut does work but I prefer lots of coconut on my donuts so I also added more on top after dipping.

Is the glaze optional for the toasted coconut donut?

Since the glaze acts as the glue for the coconut to stick to the donuts it is required. However, if you prefer a plain chocolate donut the glaze would be optional.

How would you store these donuts?

Can I make donut holes instead?

Yes, you can. Simply use a donut hole mold or a muffin mold to make its shape and assemble them the same. Bake for 20-22 minutes. You will know when they are done by poking with a toothpick and it comes out clean.

I have diabetes, will these low carb toasted coconut donuts affect my blood sugars?

Different ingredients affect people differently and the highs and lows of diabetes can be tricky. I always tell people they need to test out what works for them until they have a good understanding on what type of ingredients affect their blood sugars. These low carb toasted coconut donuts are made with almond flour and erythritol which have a lower glycemic index than regular flour and sugar. You may also want to try out some other dessert recipes.

How many calories in these donuts?

Each donut has 205 calories.

Are these donuts keto?

Yes, at only 2g net carbs per donut they are sure to fit into your macros.

Are these donuts baked or fried?

These donuts are made by baking them in the oven and are not fried. 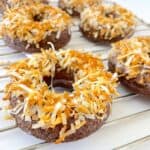