This Easy Keto Egg Bites in the Instant Pot recipe is made with just 4 ingredients and made in just 8 minutes.

If you love Starbucks bacon and gruyere egg bites you will love this simple recipe. No more spending 5 bucks a day when you can make 7 keto egg bites for the same price. If you are a fan of Starbucks, you will also enjoy these Chewy Ginger Molasses Keto Cookies.

While I was making my healthy Keto Artichoke and Onion Frittata I came up with the idea to make low carb egg bites because I wanted another breakfast option that I could grab and go and it's an easy meal prep.

Sous vide is essentially a method of cooking by vacuum sealing and immersing food in warm water. We won't be immersing these egg bites in water but we will add water in the instant pot to help steam and cook the eggs.

We use an egg bite silicone mold to help shape the eggs into bites shaped like a dome. It's a quick and simple way to make these Starbucks quality egg bites at home.

How to make sous vide keto egg bites in the instant pot?

STEP 1: You can either cook bacon and crumble it or use store bought bacon crumble. I like to microwave it to cook it a little more before I use it. About a minute on high in the microwave on a paper towel folded over it so it doesn't splatter. Fill each cup of your silicone egg bite mold with a teaspoon of bacon crumble. Set it aside.

STEP 2: In a large mixing bowl, whisk together the eggs with the heavy cream, salt and pepper. Whisk for about 1 minute until the egg mixture is frothy. Then add the finely shredded gruyere cheese to the mixture and mix until well combined.

Next transfer the egg mixture to the silicone mold. You can either eyeball it and try to pour the egg mixture evenly into the molds or use a spoon to transfer it over. It's approximately 2 - 2.5 tablespoons per cup. Leave at least an inch for the egg cups to rise during the cooking process. Cover the mold with the lid.

Place the instant pot lid on, set it to sealing and using the steam button and set the timer for 8 minutes. Once the 8 minutes are up, do a quick release (cover release with a kitchen towel). You can do a natural pressure release but why wait?

Once all the steam is released remove the cover and gently raise the trivet out of the instant pot. Be careful as it is still hot, use oven gloves to remove the trivet.

Not only is this recipe a great low carb keto option but is a great option for me as a type 2 diabetic with only 1 g of carbs per egg bite. These egg bites can also fit into a carnivore diet if you are strictly eating an animal based diet.

Top Tip: Cooking spray was not needed on the silicone molds as the bacon crumble was greasy enough. The egg bites plopped out of the egg bite mold very easily. However, if you are not using bacon or feel it may stick, you might want to spray the egg bite mold with a little bit of cooking spray.

Prepping Egg Bites are a great way to get a healthy breakfast full of protein without too much fuss. Here are a few variations on how to make them.

How many carbs in the Starbucks egg bites?

Can I use the silicone mold lid in the instant pot?

Yes, you should attach the lid to the silicone mold before steaming in the instant pot.

How many calories per egg bite? 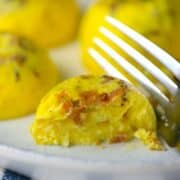 Top Tip: You may need to spray your silicone mold with cooking spray, I did not need to as the bacon provided enough grease and they did not stick.

I am a Type 2 Diabetic and I manage my blood sugars naturally. I make low carb and diabetic friendly recipes that are good for you! All recipes are developed to help you make great food without the highs and lows of diabetes.