This Low Carb French Baguette is perfectly crusty on the outside with a soft interior that melts in your mouth. This keto french bread goes well with a cheese plate, on a charcuterie board or amazingly in this Low Carb French Onion Soup recipe. With only 1g net carb per slice, it's a great low carb option.

Many low carb bread options are filled with fibers like psyllium husk powder, flax seeds or other unknown fibers that give me an upset stomach. So I set out to make a cleaner low carb and keto bread option without stuff you can't pronounce.

Spread a pad of butter on this gluten free bread and I am suddenly sitting on a cafe in Paris overlooking the Jardin De Luxembourg.

📺 Watch how to make this french bread recipe

🥘 Ingredients used for the baguette

Using simple ingredients for this recipe allows me to make this anytime I want fresh bread. The only ingredient that a low carber might not have on hand is the egg white powder but you can easily order it from amazon.

👨🏻‍🍳 Steps to make this recipe

How to make keto french baguette

STEP 2: Combine the wet and dry ingredients together in one bowl and bring together using a strong rubber spatula or wooden spoon. Once together, use your hands to shape the dough into a baguette (about 10 inches in length) and place on a parchment lined baking sheet. (see video)

STEP 3: Score the bread with a knife and then bake in the oven at 350°F for 25-30 minutes or until bread looks golden brown on the outside.

Here are some other keto bread alternative recipes

Top Tip: Shape the low carb french baguette so that more bread is exposed to the air. In other words, try not to make it flat and wide, allow more to be exposed to the hot air. This will result in a crispier crust. Narrow and long is better than wide and short.

Not going to lie, I specifically made this to be used in my Low Carb French Onion Soup recipe and it did not disappoint.

Use this low carb french baguette recipe as a side instead of dinner rolls or use as a sandwich bread by slicing lengthwise. Perfect sub sandwich.

A 1 inch slice of this low carb french baguette contains roughly 1g net carbs. Depending on your daily macros and what else you eat in your diet it could fit into a keto way of eating. Could also be part of a low carb and diabetic friendly diet as there is no sugar in this recipe.

Is there a difference between French bread and a French baguette?

Yes, a traditional French bread is wider and is less crusty where a baguette is narrow and has a crispier crust.

If you enjoyed this recipe I would love if you would share on social or pin on pinterest. 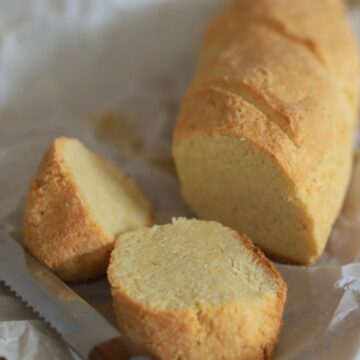 1 slice contains 1g net carb All nutritional information is based on third-party calculations and should be considered estimates. Actual nutritional content will vary with brands used, measuring methods, portion sizes and more. Top Tip: Shape the low carb french baguette so that more bread is exposed to the air. In other words, try not to make it flat and wide, allow more to be exposed to the hot air. This will result in a crispier crust. Narrow and long is better than wide and short.
Serving: 1slice | Calories: 52kcal | Carbohydrates: 2g | Protein: 3g | Fat: 4g | Fiber: 1g | Sugar: 0g
Keyword bread, french
Tried this recipe?Let us know how it was by rating and leaving a comment below.