This Low Carb French Onion Soup is a labour of love and made with thinly sliced caramelized onions, a rich broth with wine and brandy and topped with a crispy low carb french baguette and a gooey gruyere cheese topping.

When fall is upon us I start to crave soups. One of my favourite soups is a french onion soup. I was always attracted to the golden layer of bubbly cheese on top.

However, as I make this soup and add each ingredient I learn to understand the complexity of the flavours of this delicious french onion soup. I now thoroughly enjoy the flavourful notes of the broth and onions more than the crusty cheese.

📺 Watch how to make this soup

🥘 Ingredients used to make this soup

This low carb french onion soup is also topped with a couple slices of crusty low carb french baguette that I made specifically for this recipe. I then add some shredded gruyere cheese and broil it in the oven to give it that nice a bubbly crust on top.

STEP 1: add the butter and oil over medium heat in a dutch oven or heavy bottom pot, then add the thinly sliced onions with a dash of salt. Cook on medium heat until softened, stirring often. Once softened reduce heat to medium low and continue to cook for 30 to 40 minutes. Stirring often during this whole process.

STEP 2: Once the onions have become slightly browned add the garlic and allow to soften for 2 minutes. Next add the red wine and brandy and continue to simmer on low until wine is reduced to half.

STEP 3: add the beef broth, salt and pepper. Bring to a boil, then cover and simmer for 1 hour. While it's simmering slice baguette into ½ inch slices and brush both sides with olive oil. Place on baking sheet and bake in the oven at 400°F for 3-5 minutes, flipping halfway through. Once out of the oven rub each baguette with a half clove of garlic.

STEP 5: Place bowls on a baking sheet and broil in the oven for about 4 minutes just to get the cheese topping nice and bubbly. Serve with a sprig of thyme on top (optional)

There are many variations to the classic French onion soup. Here are some other ways you can make this soup.

See my other Keto Soup Recipes

Top Tip: If you don't have oven safe bowl you can place the cheese on top of the baguette slices while on the baking sheet and melt them in the oven. Then just simply top the soup with the crusty and cheesy baguette slices.

I find having this low carb french onion soup recipe in traditional oven safe bowls truly give you that classic french soup feeling.

Another option would be to use oven safe ramekins or soufle bowls as long as they are at least 10 oz in size.

Baking sheets are a must for this recipe in order to make the crusty bread and to place the oven safe bowls onto in case they boil oven and not make a mess in the oven.

What is French Onion Soup?

Traditional French onion soup is made with beef broth, caramelized onions and topped with croutons or a large piece of bread and cheese floating on top.

What are the best onions to use for this soup?

Yellow onions tend to caramelize best but a white onion will also work. I suggest not using red onions and they will be too sweet for this recipe.

Can I use any type of cheese instead of gruyere?

Any cheese that will melt nicely in the oven like provolone, fontina, emmental or mozzarella.

Do I have to use alcohol to make French onion soup?

No, just replace the alcohol liquids with the same amount of beef bone broth.

Due to the onions this soup is a little higher in carbs than most keto recipes. A cup of this soup with the bread and cheese has roughly 9g of net carbs. Therefore, depending on your daily macros this soup may or may not fit into a keto diet.

How can I reduce the amount of carbs in this recipe?

You can reduce the carbs by using less onions. Although this recipe is considered sugar free, onions will release some sugar while sauteing them. Reducing the onions to only one will still give you that onion flavour and be enjoyable. You may also want to omit the keto bread to limit the amount of carbs.

What kind of red wine did you use for this french onion soup?

I used a very dry low carb red wine for this soup.

🍽 Other low carb recipes you may enjoy

If you enjoyed this recipe I would love if you would share on social or pin on pinterest. 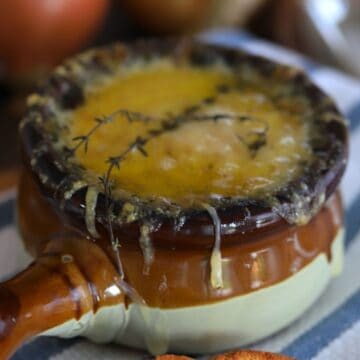 1 cup of soup with the bread and cheese contains 10g of carbs. All nutritional information is based on third-party calculations and should be considered estimates. Actual nutritional content will vary with brands used, measuring methods, portion sizes and more. Top Tip: If you don't have oven safe bowl you can place the cheese on top of the baguette slices while on the baking sheet and melt in the oven. Then just simply top the soup with the crusty and cheesy baguette slices.
Serving: 1cup | Calories: 245kcal | Carbohydrates: 10g | Protein: 7g | Fat: 18g | Fiber: 1g | Sugar: 4g
Keyword french, soup
Tried this recipe?Let us know how it was by rating and leaving a comment below.