Low Carb Focaccia brings me back to a time growing up with my italian family and the days when my mom would spend hours in the kitchen making bread. Focaccia is one of those breads she made on a regular basis in our household. She made all the bread for the family, from crusty loaf breads to focaccia. We loved when she made focaccia and we would always top it with juicy tomatoes, olive oil and garlic.

However, she made it with all purpose flour and it was definitely not low carb or diabetes friendly. Now, low carb focaccia is my go to bread recipe. Not only because it’s easy but because I can play around with it and add ingredients like lemon and rosemary. Low Carb Focaccia only takes 10-12 minutes to make. This recipe I added fresh lemon slices and rosemary which give a freshness that is like no other bread.

Low Carb Focaccia is a flatbread but unlike pizza, focaccia is a very wet dough. It is usually soft and chewy on the inside and smothered in olive oil and a sprinkle of rosemary and salt. Sliced and used as a sandwich, we usually had it with prosciutto and provolone cheese.

What does Focaccia mean?

The name focaccia derives from the Roman “panis focacius,” meaning “hearth bread”, referring to the fact that focaccia was traditionally baked in coals in Roman times. Its recipe back then consisted of rough flour, olive oil, water, a very small quantity of yeast, and salt, and was probably quite plain. (source: https://thesussexkitchen.com/blogs/blog/a-brief-history-of-focaccia)

What is Focaccia used for?

Unlike regular loaves of bread focaccia is a flatbread typically smothered in olive oil and used as a sandwich bread. It is also great to dip into sauces, soups and dips. Low Carb Focaccia can be use as a side, a scooper, dipper and made into a pizza.

What type of Lemons did you use?

I used very thinly slices organic lemons in the low carb focaccia. I used a mandolin but you can use a knife if you can slice as thin as possible. If slices are too thick you will taste the bitterness from the lemon peel. 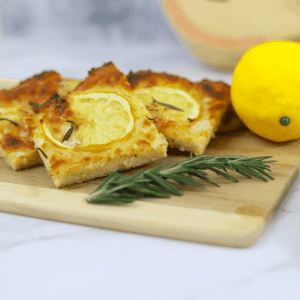 2g Net Carbs per slice. Slice the lemon very thinly otherwise you will taste the bitterness from the lemon rind.   All nutritional information is based on third-party calculations and should be considered estimates. Actual nutritional content will vary with brands used, measuring methods, portion sizes and more.
Nutrition Facts
Low Carb Focaccia with Lemon and Rosemary
Serving Size
1 square
Amount per Serving
Calories
180
% Daily Value*
Fat
16
g
25
%
Carbohydrates
2
g
1
%
Fiber
0
g
0
%
Protein
7
g
14
%
* Percent Daily Values are based on a 2000 calorie diet.
Keyword focaccia
Tried this recipe?Let us know how it was by rating and leaving a comment below.!
Share this recipe.

I am a Type 2 Diabetic and I manage my blood sugars naturally without medications. I follow a healthy low carb lifestyle and I create and share delicious diabetic friendly recipes.