Scrumptious, chewy and chocolatey low carb Almond Flour Blondies are only 1g net carbs per square and make a delicious dessert or snack. No mixer is required and they are super easy to make.

Whats the difference between blondies and brownies?

Blondies are one of the easiet baking recipes to make and are dense, rich and fudgy. They are basically a vanilla version of a brownie but with more of a caramel flavor which comes from the brown erythritol that is used in this recipe. These almond flour blondies are also gluten free.

If you enjoy blondies you might want to check out my Keto Pumpkin Spice Blondie recipe.

Ingredients use for the almond flour blondies

Made with almond flour to keep the carbs to a minimum while still maintaining that fudgy blondie that we all love.

See the recipe card for quantities.

How to make the almond flour blondies?

In a mixing bowl, mix together the dry ingredients (except the chocolate) and set aside.

STEP 2: In another bowl cream together the softened butter with the keto brown sugar erythritol, you can use a rubber spatula or whisk for this.

STEP 3: Now add the eggs and dry ingredients and mix with a rubber spatula until combined. Mix for at least one minute.

STEP 5: Once the chocolate chips are mixed through transfer the batter to a well-greased or parchment-lined 8" x 8" baking pan. Spread it out evenly in the pan.

STEP 6: Bake at 350°F for 18 - 20 minutes. Check it at 18 minutes, if the center appears underbaked allow it to bake for 20 minutes. Allow to cool completely before removing it from the pan otherwise, it may fall apart. Cut into squares and enjoy!

Cooling: let the almond flour blondies cool completely, they will likely fall apart if removed while they are still warm.

These almond flour gluten free blondies can be made in a variety of ways, here are just a few that I have tried.

Why did my blondies come out cakey?

Blondies may come out cakey when the batter is not mixed long enough or they may have been overbaked.

Are blondies meant to be gooey in the middle?

This is a personal preference as some people would rather have a more cakey texture. If you prefer extra gooey you may want to add an extra egg yolk to the batter.

Are these almond flour blondies safe for someone with diabetes?

This recipe uses low-carb ingredients like almond flour, erythritol, and low-carb chocolate chips and may be safe for someone with diabetes. Different foods affect everyone differently and I would suggest monitoring your blood sugars when trying new recipes to see how they may affect you personally.

Are these almond flour keto blondies?

These low-carb almond flour blondies would be considered keto-friendly and may fit into your daily macros as they are only 1g net carbs per square. 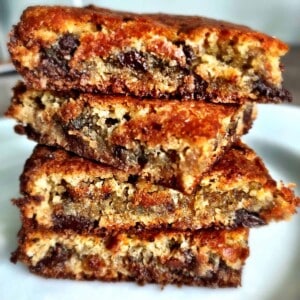 Get the New E-bookCheck out Low Carb Comfort Food!

Top Tip: if not using parchment paper, generously grease the baking pan with butter or coconut oil. Cooling: let the almond flour blondies cool completely, they will likely fall apart if removed while they are still warm.

I am a Type 2 Diabetic and enjoy creating low-carb and diabetic-friendly recipes that are good for you! All recipes are developed to help you make great food without the highs and lows of diabetes.