Making this Extra Creamy Low Carb No Bake Peanut Butter Cheesecake was not only easy to make but I was drooling while I was making it because I couldn't wait to dig into it. I am a huge lover of peanut butter, like it's kind of dangerous for me because I can easily eat half a jar if I don't contain myself.

Peanut butter is an easy go to snack, usually with a spoonful straight out of the jar. I know, it's a bad habit to take on but now that I only keep all natural creamy peanut butter in the house, it's a little better than the other stuff with all those hydrogenated oils.

Where does Cheesecake come from?

As far as I can tell through my research it originate in ancient Greece. It may have been made a little different and sometimes made with cottage cheese and the crust could have been made with crushed cookies but it was something that resembled cheesecake. Nowadays many people go to The Cheesecake Factory for their cheesecake.

How to make Peanut Butter Cheesecake no bake?

It's a fairly simple process, you can either make it with or without a crust. I chose to make it with a crust which consists of almond flour, cacao powder, butter and erythritol Then you just mix the filling together and scoop it onto the crust and let it refrigerate for a few hours.

Why do a no bake cheesecake?

So, I set out to make the best no bake cheesecake there was but I had to use my favourite creamy peanut butter.

Can I freeze a no bake cheesecake?

You can after you refrigerate it for a few hours, wrap the entire pan in plastic wrap and then tinfoil and freeze. It could last up to 2 months in the freezer. If you want to do individual portions you can wrap each portion with plastic wrap and tinfoil. 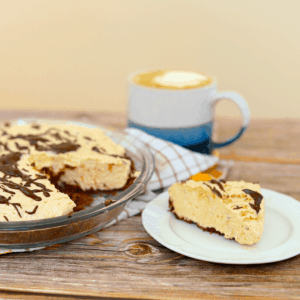 4g net carbs per serving For decoration I added melted chocolate drizzle on top of the cheesecake which is optional.
Nutrition Facts
Peanut Butter Cheesecake No Bake
Serving Size
1 slice
Amount per Serving
Calories
364
% Daily Value*
Fat
35
g
54
%
Carbohydrates
9
g
3
%
Fiber
5
g
21
%
Sugar
3
g
3
%
Protein
7
g
14
%
* Percent Daily Values are based on a 2000 calorie diet.
Keyword cheesecake
Tried this recipe?Let us know how it was by rating and leaving a comment below.

Have a look at my dessert recipes for more sweet ideas.